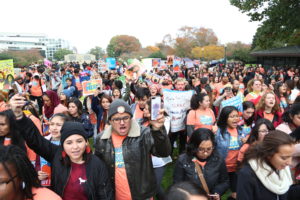 On October 4, 2019, the Presidents’ Alliance, in collaboration with Perkins Coie, filed an amicus brief in support of Deferred Action for Childhood Arrivals (DACA) and the consolidated cases in front of the Supreme Court of the United States.

The Supreme Court heard oral arguments on the case on November 12, 2019, with the decision later issued in June 2020.

On October 8, 2019, the Presidents’ Alliance and partners publicized the filing of the amicus brief through a press statement, social media, and other communications materials.

Below are the links provided for partners to download the final draft of the brief and a communications toolkit containing sample statements, social media, op-eds, and campus messages to publicize an institution’s participation in the brief.

Additionally, we shared a memorandum created by the #HomeIsHere campaign that outlines and summarizes all amicus briefs filed in support of DACA, including the list of 1,400 educational, legal, business, and non-profit signatories.