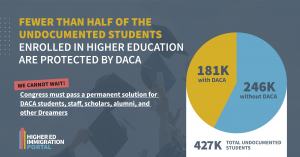 Nearly ten years ago, on June 15, 2012, the sustained advocacy and courageous storytelling of undocumented students won a transformative victory when the Deferred Action for Childhood Arrivals (DACA) program was announced. More than 800,000 individuals have since relied on the work permits, deportation protections, and other opportunities afforded by DACA to pursue their career and educational goals, including many on your respective campuses. In the process, these DACA recipients have demonstrated why expanding opportunities for immigrants is so important – both to their own lives and to the future of this country. And, now, as the majority of undocumented students coming to our campuses do not have DACA and the future of DACA is under threat in the courts, the moment to build on DACA’s successes and press for bipartisan Dream legislation is more urgent than ever.

Ways to Support the DACA Anniversary from Your Campus

We hope you and your campus will be able to celebrate the transformative impact of DACA and the many contributions of undocumented students on your campuses and in your communities. 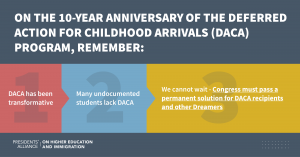 Messaging Focus for DACA at 10

Three core messaging points to consider on and around the DACA 10 Year Anniversary: