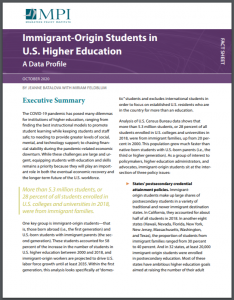 The Presidents’ Alliance on Higher Education and Immigration commissioned a Migration Policy Institute-produced report, Immigrant-Origin Students in U.S. Higher Education, demonstrating that in 2018 more than 5.3 million students, or 28% of all students enrolled in colleges and universities, were immigrants or the children of immigrants. The report’s findings reveal the growing proportion of first and second generation immigrant students in postsecondary education, the diversity of these students, and their importance for future U.S. labor growth. The report’s findings also show the direct impacts and real-life consequences that immigration policies can have on millions of students and families.

You can view the full report here. To download U.S. and state-level data on enrollment and other characteristics for first- and second-generation students, click here.

Among the report’s key findings: