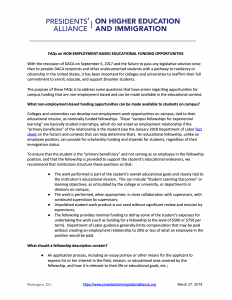 65 institutions of higher education and one higher education system Board, most of which are also member institutions of the Presidents’ Alliance on Higher Education and Immigration, have signed onto an amicus brief filed today supporting a legal challenge to recent immigration policy changes regarding the calculation of “unlawful presence” for holders of F, J, or M visas. The brief urges the federal court to grant the plaintiffs’ motion for a preliminary injunction.
This “friend of the court” brief presents compelling evidence of how “international students and scholars add immeasurable value to the educational environment of all host institutions,” “are a key reason why American colleges and universities are the world’s leading destination for higher learning,” and “bring significant benefits to the U.S. economy.” The brief explains that “the USCIS’s new ‘backdating’ rule introduces considerable uncertainty into the calculation of unlawful presence and needlessly exposes international students to devastating reentry bans,” and that the “new rule will harm international students and scholars, as well as the institutions which host them.” The brief notes “the USCIS’ new backdating rule will likely result in fewer international students, scholars, and instructors contributing to our communities.”

Representing the institutions, the law firm Jenner & Block prepared and filed the amicus brief for the case of Guilford College, et al., v. Kirstjen Nielsen in the U.S. District Court for the Middle District of North Carolina, with the assistance of local counsel Poyner Spruill.

“International students and scholars are vital members of our campus communities and important contributors to our nation,” said John J. DeGioia, Georgetown University President and Presidents’ Alliance Steering Committee Member. “The talents, perspectives, insights, and passion to serve our world that they bring our campus communities benefits our nation and contributes to the common good that we all share.”

The college and university signatories represent a broad coalition of institutions and come from 24 states and the District of Columbia. Located in communities spanning the political spectrum and ranging from urban centers to rural farm areas, collectively they teach and employ millions of people. The signatories include large public universities, private research universities, small liberal arts colleges, and expansive community colleges.

About the Presidents’ Alliance
The non-partisan Presidents’ Alliance on Higher Education and Immigration brings together college and university leaders committed to increasing public understanding of how immigration policies and practices impact our students, campuses and communities, supporting policies that create a welcoming environment for immigrant, undocumented and international students on our campuses, and identifying and sharing best practices. The Alliance is comprised of over 420 presidents and chancellors of public and private colleges and universities, enrolling over four million students in 41 states, D.C. and Puerto Rico. The Presidents’ Alliance invites college and university presidents and chancellors who endorse the principles in the Alliance’s Founding Statement to join the Alliance.