On September 29, 2020, the Presidents’ Alliance and TheDream.US 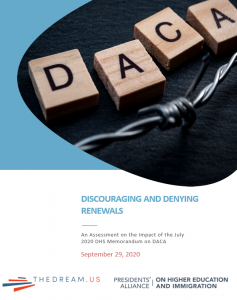 released a new report, Discouraging and Denying Renewals: An Assessment on the Impact of the July 2020 DHS Memorandum on DACA, which surveyed close to 1,800 DACA recipients to assess the impact of the U.S. Department of Homeland Security’s new DACA policies. You can read the full report here, our press release here, and supplemental narratives here. Key takeaways from the report include: