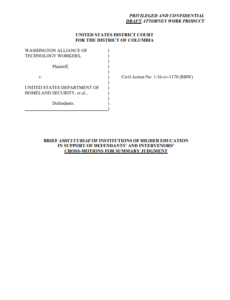 On November 21, 2019, the Presidents’ Alliance, in collaboration with Jenner & Block, filed an amicus brief in support of Optional Practical Training (OPT) in Washington Alliance of Technology Workers v. Department Of Homeland Security et al.The brief was joined by 118 public and private universities and colleges representing all sectors of higher education. The brief and its diverse, wide-ranging list of supporters demonstrated  how colleges, universities, and the economy benefit tremendously from OPT.

For more information on this case, see our press statement, the backgrounder prepared by the Presidents’ Alliance and partners, and NAFSA’s website.

On January 29, the federal district court judge in the WashTech litigation issued summary judgement in favor of the government and intervenors; and denied the motion to strike the Presidents’ Alliance amicus brief. Though this decision will likely be appealed by the plaintiffs it represents a tremendous victory for higher ed institutions.

On November 30, 2020, a federal judge in the district court for the District of Columbia concluded that the Department of Homeland Security (DHS) has legal authority to allow foreign students to work in the U.S. after graduation under OPT. The judge granted summary judgment to DHS and the parties that intervened in the lawsuit in support of OPT, the National Association of Manufacturers, U.S. Chamber of Commerce, and Information Technology Industry Council. The judge will issue a memorandum opinion and final order confirming these conclusions, “absent extraordinary circumstances,” in the next 60 days.

Additionally, the judge denied the plaintiffs’ motion to strike the higher education amicus brief which the Presidents’ Alliance coordinated and to which 118 colleges and universities joined. As noted in our response to the plaintiffs’ motion, the perspectives of institutions of higher education “can, and should, aid the Court as it considers the case.”

© 2021 Presidents' Alliance. on Higher Education and Immigration. All Rights Reserved.