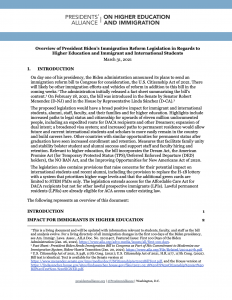 On day one of his presidency, the Biden administration announced its plans to send an immigration reform bill to Congress for consideration, the U.S. Citizenship Act of 2021. There will likely be other immigration efforts and vehicles of reform in addition to this bill in the coming weeks. Though we will not have the bill text until it is introduced, the Biden transition team released a fact sheet summarizing the bill’s content. The bill will be introduced in the Senate by Sen. Bob Menendez (D-NJ) and in the House by Rep. Linda Sanchez (D-CA).

This legislation will have a broad positive impact for immigrant students and higher education. Increased paths to legal status and citizenship along with a broadened visa system would allow current students to remain in the country, continue their education, and work to support their education. Other countries with similar opportunities for permanent status after graduation have seen increased enrollment and retention. Measures that facilitate family unity and stability bolster student success and support faculty hiring and retention.