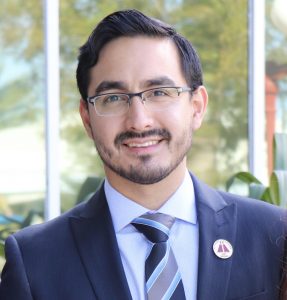 Washington, D.C.— The Presidents’ Alliance is thrilled to announce that Diego Sánchez will be joining the Presidents’ Alliance as the new Director of Policy and Strategy, tasked with leading the development and implementation of the legislative and administrative policy agenda related to undocumented students. Given the precarious future of the Deferred Action for Childhood Arrivals (DACA) program, preparing campuses for a post-DACA world, supporting the many undocumented students in higher education who do not have the protections of DACA, and securing a permanent legislative fix for DACA recipients and the broader Dreamer population are urgent priorities.

Prior to joining the Presidents’ Alliance, Diego led the Southern Poverty Law Center’s federal immigration portfolio. Diego is an immigration lawyer, admitted to the Florida Bar, with over ten years of experience in strategic advocacy for immigrant justice, including experience in federal immigration policy, immigration campaigns at the local, state, and national levels, and community organizing. Diego’s passions for immigrant justice and access to education stem from his personal journey pursuing the American dream. Diego was born in Argentina and immigrated to the United States with his family at age nine. He grew up in South Florida, where he attended high school and college as an undocumented student. President Barack Obama notably cited Diego in his June 2013 immigration reform address for Diego’s exemplary achievements and aspirations as a Dreamer and DACA recipient.

Miriam Feldblum, executive director of the Presidents’ Alliance, stated: “At a time when policy and advocacy for Dreamers are of the highest priority, Diego brings a wealth of experience that will benefit the Presidents’ Alliance and, more importantly, undocumented students and DACA recipients on campuses across the country. We all are lucky to benefit from his personal experience, legal and policy expertise, and commitment to this work.”

Diego Sánchez, the new Director of Policy and Strategy of the Presidents’ Alliance stated, “I am excited to join the Presidents’ Alliance at such a pivotal moment for immigrants’ rights, and be able to work on issues close to my heart, such as those affecting undocumented students. I look forward to supporting campus leaders nationwide as we continue to work with Congress and the White House to make Dream legislation a reality during this Congress.”

The nonpartisan, nonprofit Presidents’ Alliance on Higher Education and Immigration brings college and university presidents and chancellors together on the immigration issues that impact higher education, our students, campuses, communities, and nation. We work to advance just, forward-looking immigration policies and practices at the federal, state, and campus levels that are consistent with our heritage as a nation of immigrants and the academic values of equity and openness. The Alliance is composed of over 550 presidents and chancellors of public and private colleges and universities, enrolling over five million students in 43 states, D.C., and Puerto Rico.