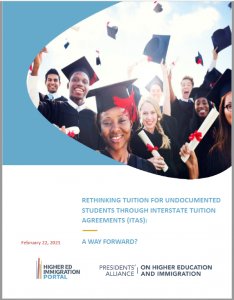 Substantial hurdles remain for undocumented students to access and graduate from higher education institutions. These hurdles include being barred from enrolling in public institutions in three states (Alabama, Georgia, and South Carolina) and facing restrictions on accessing in-state tuition in five more states (Missouri, New Hampshire, North Carolina, Tennessee, and Wisconsin). As a result, it is important to identify additional pathways for undocumented students to access higher education opportunities.

The report seeks to answer two key questions: 1) To which ITAs do the eight restrictive or prohibitive enrollment states belong? 2) Are undocumented students eligible to participate?

Through a review of online tuition policy documents and follow-up phone conversations with state boards of higher education, the report found that undocumented students’ eligibility for ITAs likely varies by region, state, and institution. When eligible, their participation in the ITA is generally approved on a case-by-case basis.