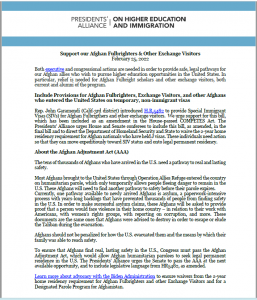 Both executive and congressional actions are needed in order to provide safe, legal pathways for our Afghan allies who wish to pursue higher education opportunities in the United States. In particular, relief is needed for Afghan Fulbright scholars and other exchange visitors, both current and alumni of the program.

Include Provisions for Afghan Fulbrighters, Exchange Visitors, and other Afghans who entered the United States on temporary, non-immigrant visas

Rep. John Garamendi (Calif-3rd district) introduced H.R.5482 to provide Special Immigrant Visas (SIVs) for Afghan Fulbrigthers and other exchange visitors. We urge support for this bill, which has been included as an amendment in the House-passed COMPETES Act. The Presidents’ Alliance urges House and Senate conferees to include this bill, as amended, in the final bill and to direct the Department of Homeland Security and State to waive the 2-year home residency requirement for Afghan nationals who have held J visas. These individuals need action so that they can move expeditiously toward SIV status and onto legal permanent residency.