Campus Checklist to Prepare for Court Decisions on DACA 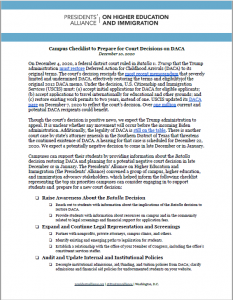 On December 4, 2020, a federal district court ruled in Batalla v. Trump that the Trump administration must restore Deferred Action for Childhood Arrivals (DACA) to its original terms. The court’s decision rescinds the most recent memorandum that severely limited and undermined DACA, effectively restoring the terms and eligibility of the original 2012 DACA memo. Though the court’s decision is positive news, there is another court case by state’s attorney generals in the Southern District of Texas that threatens the continued existence of DACA.

Campuses can support their students by providing information about the Batalla decision restoring DACA and planning for a potential negative court decision in late December or in January. The Presidents’ Alliance on Higher Education and Immigration (the Presidents’ Alliance) convened a group of campus, higher education, and immigration advocacy stakeholders, which helped inform the following checklist representing the top six priorities campuses can consider engaging in to support students and prepare for a new court decision: